For current news and information on COVID-19 in South Africa, visit www.sacoronavirus.co.za

Are enterprise-wide project management offices useful in an organisation?

It all started in the 19th century when the agricultural industry needed proper management and governance.  While this was a very rudimentary form of project management, the concept evolved into what we know today. Project management began to be recognised as an operational imperative in the 1950s, initially as the domain of government departments only but due to their success, are now omnipresent in all well-functioning organisations. Today, PMOs are dynamic entities that specialise in tackling any project and in a fast-paced and interconnected world, companies have to use PMOs to outsmart and stay ahead of the competition. 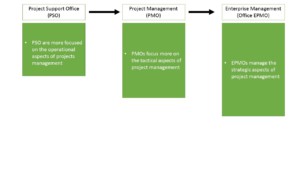 The key function (refer to figure 1) of an EPMO is to align all the PMOs and the individual projects to the company strategy, goals and vision. EPMOs are structured in such a way that they report directly to the CEO & board because they are an “independent” body in the organisation.  The PMO is a department in the company that sets out the standards and provides governance, enforces accountability and establishes discipline to manage projects in an objective and consistent way. The most compelling reason for the introduction of a EPMO is to gain organisation-wide support for certain projects that are being undertaking. It’s also a useful way to avoid overlap, repetition, or worse; missing parts of the process. In a nutshell, EPMOs curb many of the challenges faced by multinational organisations running big, complex, expensive and often, multi-jurisdiction projects. The presence of an EMPO is necessary in a world where the cost of services is on the rise and often the limiting factor of many projects, especially if there is wasteful or unnecessary expenditure which means the project runs over budget or cannot be completed due to lack of available funds. 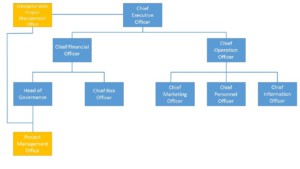 How does the enterprise-wide approach to project management really work?

Typically, EMPOs do not want a step-by-step breakdown of the project but rather a holistic view of the project. Standardisation across the organisation and buy-in from top level management are paramount to EPMOs and the company’s project success rate.

EPMOs collaborate with all the PMOs that exist across the organisation’s different departments. The relationship between the PMO and the EPMO should not be viewed as a parent-child relationship but rather as an older brother, younger sister relationship.  The overall role of the EPMO is one of a mentor and not an enforcer because some of the executives may view the EPMO as treading on their “executive territory”. The key to the success of an EPMO is that it should be independent of all the other departments in the organisation as this will keep all departments honest.  The personnel at EPMOs are supposed to have extensive project management experience and general business acumen. In successful EPMOs the staff usually has an average of 10 years working experience.

What does the research say?

A study conducted in 2016 by Project Management Solutions across 226 companies globally, shows that 85% of respondents now have a PMO in place. This is a substantial increase from 2000 when only 47% of companies had a PMO, and even up on 2014 when the same research revealed that 80% (90% in large firms) deployed a PMO.

The topline findings of the 2016 report highlight the benefits of a PMO as respondents reported the following: 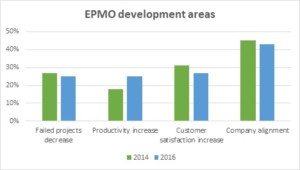 Of course, there are many considerations with regards to setting up a PMO, not least of which is the cost and time to build capacity and trust – the same research notes that there is a correlation between the age of the PMO and its capability, so you need to give yourself two to five years before the real benefits start to show themselves.

Do you? Don’t you need a project office?

There are many benefits of having an EPMO and they seemingly outweigh the disadvantages. Some of these advantages include: cost cutting, increased project completion, increased resource utilisation, very little overlap and training and mentoring.  These are all very beneficial to a company however as with all things this isn’t the silver bullet and there are unintended consequences and draw backs of a project office. Some of the disadvantages of EPMOs are; no support or buy-in from senior management, underutilisation, poor communication and complexity.

The crux of it is, that if implemented and managed properly, the balance of the scales is tilted in favour of an enterprise-wide project management office mainly because of project profitability. But beware, certain industries are at risk of underutilisation, in which case, the cost: benefit ratio swings the other way, so if you’re in mining, you can ignore everything you just read, but everybody else should seriously consider the introduction of project offices in their business, and if you have them already, then you definitely need an enterprise-wide solution too.

BUSINESS NEEDS VS. EDUCATION OUTPUT – What’s wrong with this picture?

By Lwazi Sithole, Head of Mindworx Academy The South Africa government has devised financial incentives that allow businesses to claim back much

#HOTJOBS – We are hiring Java Developers

Mindworx is hiring Java Developers. We are looking for individuals with at least 6 years’ experience in Java development. Applicants

By Lwazi Sithole, Head of Mindworx Academy The most productive workers in the world today leverage technology to help them

A vacancy exists for a Chief Executive Officer at the Gauteng Partnership Fund. If you want to make an impact

Don’t be too quick to dismiss the idea of career planning for centenarians. People born in this millennium have a good chance of living beyond 100 years, making nonsense of the retirement age of 60.

A vacancy exists for a Chief Executive Officer at South African Tourism. This position reports to the Chairperson of the

The need for digital transformation is clear. The 4th Industrial Revolution (4IR) is underway, and companies that capitalise will have a better chance of surviving in the digital world.